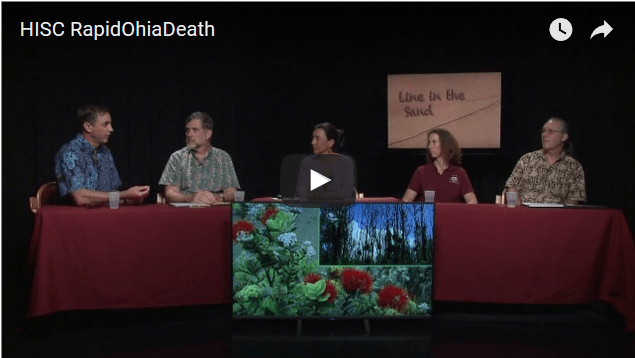 The series title comes from the need to take a stand, in essence draw a line in the sand, to control the influx and spread of invasive species and their threats to our economy, ecology, public health, and quality of life.  It’s truly a biosecurity issue, and the stakes are extremely high.

Take, for example, the threat posed by Rapid ‘Ohi‘a Death.  This fungal disease has struck over 55,000 acres of forest on the Big Island, weakening or killing ‘Ohi‘a, our dominant native tree species – all within the last decade.

First reports of dying trees started coming in 2010, and in 2014 the actual cause was identified.  Work at all levels, from the federal government to State and community organizations, is now focused on identifying effective treatment strategies and controlling the spread of the infections.

Why?  Beyond the beauty of the ‘Ohi‘a and its cultural significance,  the ‘Ohi‘a is an ecologically significant species that provides both habitat and food for numerous forest plants and animals.  As a major component to the forest canopy, it’s destruction could have serious implications for the health of the rest of the forest community and for our watersheds as well.

These are the kinds of topics taken up by “Line in the Sand.”  Each program provides background information on the target species or problem, highlights the efforts to control them, and provides ways the public can play a role in keeping Hawaii safe from invasive species.  Information is provided by experts in each subject area and the discussion is moderated by Christy Martin, Public Information Officer for the Coordinating Group on Alien Pest Species (CGAPS) here in Hawaii.

The programs air regularly on the University of Hawaii Cable Channel (Oceanic Digital 355) and on Educational Media Center’s YouTube Channel.